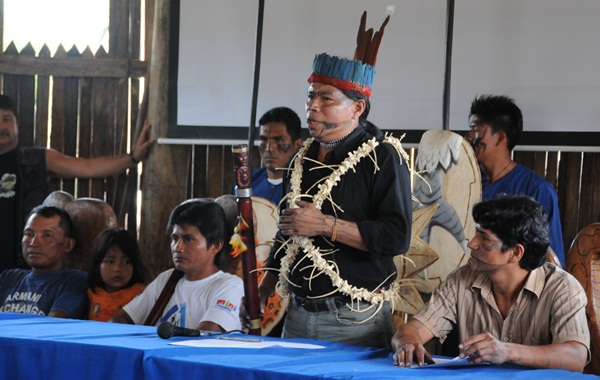 PRESIDENCY OF THE REPUBLIC OF ECUADOR

On behalf of the Original Kichwa People of Sarayaku, we thank you for your response to our Open Letter of September 13 of this year, addressed to the President of the Republic, where we expressed our concerns regarding compliance with the sentence issued by the Inter-American Court of Human Rights, on July 27, 2012, as well as the eleventh oil round that they want to carry out in the Amazonian territories.

Mr. Mera, during your visit in April of this year, together with the Inter-American Court, you brought us the good news that the Ecuadorian State finally recognized having violated the rights of the people of Sarayaku and that it was willing to repair the damage. caused.

However, we remain concerned about what the Government is doing in the Central-South Amazon. For a few weeks now, officials from the Hydrocarbons Secretariat have been entering the Kichwa, Shuar, Achuar, Sapara peoples and communities and other nationalities to socialize the new oil round that directly affects our territories.

He calls this socialization "prior, free and informed consultation", but it is not true.

is not prior because the government officials themselves say that the decision has already been made and that the tender "goes because it goes."

not free because the indigenous peoples and nationalities have publicly said that they do not want officials to enter their territory to socialize. But the officials enter anyway, sometimes by force, sometimes causing division or turning the leaders against their own people. They have even hired young indigenous people who live in the city to enter the territories to socialize, so that in case of rejection, the people unload their disagreement on them and not on the officials of the ministries.

It is not an informed inquiry because the reality of the negative impacts of oil exploration and exploitation is never really explained. We and other peoples are already painfully aware of these impacts that the supposed socializers and community relations never mention.

Consultations are only limited to offering money and wonder. in those conditions the consultation is not in good faith.

The judgment of the Inter-American Court, which we reached with so much effort, provides that the State carry out a prior consultation in good faith "According to international human rights standards."

The ruling also states that necessary measures must be adopted to ensure that the right to consultation is fulfilled, "for which the participation of the communities themselves must be ensured." That has not been fulfilled either, since the supposed consultations that are being carried out are based on Decree 1247, which was issued without the original peoples and nationalities having previously known it, or discussed it, or agreed on its content.

Meanwhile, the consultations of the new oil round must be suspended because by holding them under the conditions that we have previously mentioned, the rights of indigenous peoples are again violated, as if the sentence of the Inter-American Court was of no use.

On the other hand, until now, they have not informed us when they are going to start removing the ton and a half of explosives that the oil company left planted in our territory and that the Inter-American Court ordered the State to remove "immediately" in 2005. , an order that has been reiterated in the sentence.

It is contradictory that, without even having repaired the damage caused by the previous oil project in our territory, on October 17, 2012, an official from the Secretary of Hydrocarbons let us know that our territory is going to be included again in Block 74 of the new South East oil round.[1]

As we told you before, we are concerned about this way of acting by the National Government. We are a peaceful people, we defend our territory and our culture based on human rights. We believe that the State must recognize the value of our struggle and make its word count, complying with the sentence issued by the Inter-American Court.

The injustice and cruelty that we suffered for a decade cannot be repeated for us or for our indigenous brothers in the Amazon.

[1] Official Letter No. 004-B74-SH-P-2012 addressed by Ing. Edgar N. Martínez of the Hydrocarbons Secretariat to the President of Sarayaku.

This article has been read 19 times