"The State must consult the Sarayaku People in a prior, adequate, effective manner and in full accordance with the international standards applicable to the matter in the eventual case that it intends to carry out any activity or project to extract natural resources in its territory"

In 1996, the Ecuadorian State granted a large part of the sacred territory of Sarayaku to the CGC oil company of Argentine origin for the Block 23 project. To do so, they did not inform, they did not consult, much less did they obtain the consent of the Sarayaku People.

Sarayaku opposed from the beginning the entry of the oil company into their territory because they knew that it would bring with it destruction and violence. Between late 2002 and early 2003, the CGC entered Sarayaku territory by force, escorted by soldiers, drilled holes in the jungle and planted high-power explosives for hydrocarbon seismic exploration. Men, women and children from Sarayaku mobilized in defense of the territory and the Pachamama who was being attacked. Four young people were illegally detained and tortured, several leaders were attacked and threatened; the passage through the Bobonaza River was closed to Sarayaku. All this to defend their right to live free and in peace.

Thanks to the struggle of Sarayaku and its allies before International Justice, the CGC company has been able to leave the territory and the Ecuadorian State begins to remove the explosives from the territory. However, the fight will continue to ensure that the threat of oil on Sarayaku and their rights is never repeated.

All about the Sarayaku Case

Sarayacu has a long history of opposition to oil exploitation, due to its serious environmental and social impacts. In 1989 we prevented the ARCO company from finishing its oil explorations within our territory. The conflict with CGC began in 1996 when the government of Ecuador and the General Fuel Company (CGC) of Argentina signed an oil exploration contract in "block 23", covering 200,000 hectares of which most is territory. of Sarayacu. The people of Sarayacu were not consulted and from the beginning we opposed oil exploration.

Because Sarayacu is the community that has the most inhabitants and the most territory within block 23, CGC first approached Sarayacu, trying to deceive people through offers of money and development works. He managed to bribe Telmo Gualinga, president of Sarayacu from 1997 to 1999, giving him a personal contract to build a drinking water system in his neighborhood of the community. The company was so sure that it would convince us that it publicly stated that it would not start any exploration work before obtaining 100% support from the communities on the block. However, the people of Sarayacu did not accept the oil activity, and subsequent presidents did not allow themselves to be bribed. Therefore, from 2000 until now, the CGC has maintained a true war of slander against Sarayacu, with the aim of destroying trust between the people and their own leaders. Since it was unable to destroy Sarayacu, the CGC began to make contact with other smaller communities, hiring their leaders directly, and thus managed to enter several other communities.

The CGC's strategy is based on bribery, disinformation, and social disintegration, and violates articles 84 and 88 of the Political Constitution of the Republic of Ecuador. The American oil company Burlington Resources also appears as a shareholder in block 23.

In 2003, the Association of the Kichwa People of Sarayaku (Tayjasaruta), with the support of various national and international organizations, filed a complaint with the Inter-American Commission on Human Rights (IACHR). The IACHR is one of the two organs of the Organization of American States (OAS) in charge of the promotion and protection of human rights in the American continent, and acts as the first international instance before accessing the Inter-American Court of Human Rights (IA Court).

The complaint alleged violations by Ecuador of the People's rights to property, protection and judicial guarantees, freedom of movement, integrity, life, political participation, freedom of conscience and religion, health and culture.

In December 2009, the IACHR issued a substantive report concluding that Ecuador had violated, among others, the Sarayaku's rights to life, integrity, property, and judicial guarantees. The IACHR issued a series of recommendations to the Ecuadorian State, which were not complied with.

Based on this, the IACHR decided to file a lawsuit before the Inter-American Court in April 2010. The Court is the jurisdictional body for the protection of human rights of the OAS, in charge of enforcing the American Convention on Human Rights by all States. OAS members that ratified it and recognized the jurisdiction of the Court, including Ecuador. The Court, in this way, is the parallel court in the American continent to the European Court of Human Rights.

Current status of the jurisprudence of the Inter-American Court regarding the rights of indigenous peoples. Few cases related to the rights of indigenous or tribal peoples have come before the Inter-American Court: only fifteen sentences compared to the nearly 130 contentious cases that the Court has heard since 1987 (These cases have provided the Court with the opportunity to interpret the American Convention on Human Rights in light of the cultural specificities of traditional societies.

Of these fifteen rulings issued by the Court regarding violations of the rights of indigenous or tribal peoples, only six have referred to the territorial rights of these peoples. Based on the “right to private property” set forth in the Convention, the Court has developed the right of members of traditional peoples to their ancestral territories. Thus, it has affirmed their right to be recognized as owners of their ancestral lands and of the traditionally used natural resources found therein. This jurisprudence resulted, on the one hand, in the affirmation of the right to restitution of territories of the peoples that were illegally dispossessed, and, on the other hand, in additional conditions to be able to carry out an expropriation. In this way, if the States want to exploit natural resources in indigenous territories, they are obliged to carry out prior environmental and social impact studies, to consult the interested people in order to obtain their consent, and to share the benefits. In addition, when it comes to large-scale projects, which may have a greater impact on the territory, the States are obliged to obtain the consent of the indigenous community.

The case of the Kichwa People of Sarayaku and its potential to allow a consolidation of jurisprudence. The examination of this case by the Inter-American Court is of great importance, since it could allow the Inter-American system for the protection of human rights to specify and strengthen its jurisprudence on the rights of indigenous and tribal peoples to their ancestral territories.

Importance of the present case given the situation of exploitation of resources in ancestral territories. Unfortunately, the case of the Sarayaku People for preserving their territory and ensuring their survival is not the only one in the Americas. On the contrary, it exemplifies the struggle of the ancestral peoples in the Americas against the omnipresence of companies that exploit natural resources or that carry out megaprojects, such as the construction of dams or highways, seriously affecting said territories.

We must not forget that the States, the only ones that can be sanctioned by the Inter-American Court, are internationally responsible before it if they do not comply with their obligations regarding activities carried out in indigenous territories by private companies. In this sense, the ruling of the Court in the Sarayaku case could have an impact, not only in terms of the obligations of Ecuador, but also of the other States parties to the American Convention, to respect the rights of indigenous and tribal peoples. .

Reaffirmation of the obligation to obtain free, prior and informed consent

Precisely, one of the conditions that the Court should impose in this case, beyond simply consulting the community, is obtaining their free, prior and informed consent, since it is an extractive project that has a significant in the welfare and rights of the Sarayaku People. Therefore, the case could serve the Inter-American Court to delve into the scope of this right.

The obligation to consult is being criticized by the States because, according to them, it constitutes a brake on their “development”. However, it is essential considering that the territories are the basis for the survival of indigenous and tribal peoples. A study by the UN Rapporteur on the rights of indigenous peoples regarding the consequences of large-scale development projects on the rights of indigenous communities, observes that as a consequence of these activities, indigenous peoples are victims of "profound social and economic changes that the competent authorities are often unable to understand, let alone foresee. Large-scale development projects will inevitably affect the living conditions of indigenous peoples. Sometimes the effects will be beneficial, very often devastating." The Rapporteur, in his report referring to his visit to Ecuador in 2006, recommended that the concessions granted to oil companies be reviewed.

"Sarayaku will not fall even if others have succumbed, Sarayaku
will remain resisting” Sarayaku Prophecy.

Do you want to collaborate?

Become a Defender of the Jungle 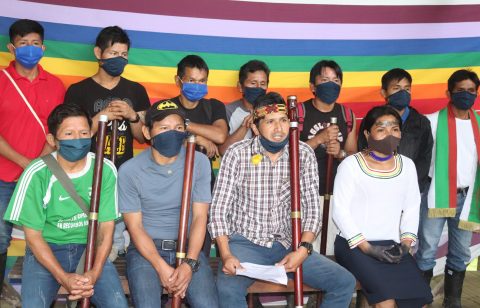 Sarayaku in the Ecuadorian constitutional court: Vindication of our territorial rights

In the midst of a critical situation due to floods and numerous COVID-19 infections, Sarayaku will once again be before a court... 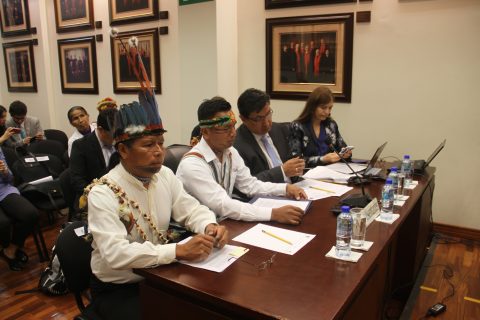 San José, December 1, 2016.- Leaders of the Original Kichwa People of Sarayaku; his lawyer, Mario Melo, and... 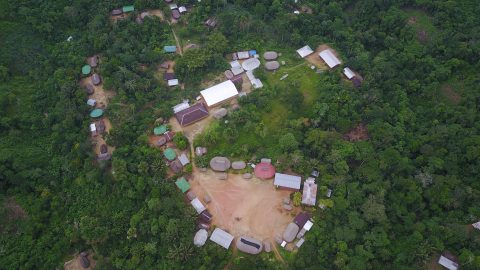 Invitation to the live broadcast of the Sarayaku case supervision

INVITATION TO THE LIVE TRANSMISSION OF THE MONITORING HEARING OF COMPLIANCE WITH THE JUDGMENT GIVEN BY THE COURT... 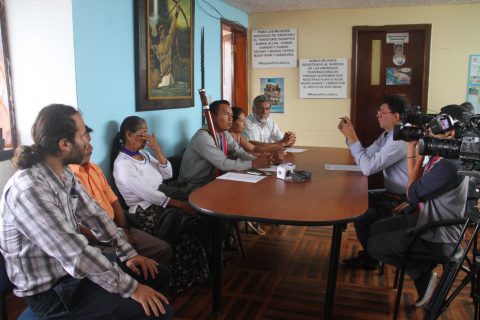 PRESS RELEASE Sarayaku, November 28, 2016 Hearing to monitor compliance with the sentence of November 27...

The Original Kichwa People of Sarayaku organize themselves to attend the hearing to monitor compliance with the sentence on December 2, 2016 at the Inter-American Court of Human Rights.

Four years have passed since the Inter-American Court declared that the Ecuadorian State is internationally responsible for...

After four years of the judgment of June 27, 2012 by the Inter-American Court... 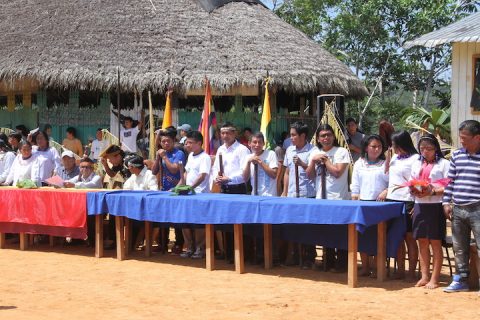 Case of the Kichwa indigenous people of Sarayaku vs. Ecuador Act of acknowledgment of international responsibility...

Two years after the sentence issued by the Inter-American Court in favor of the people of Sarayaku.

The Kichwa People of Sarayaku show concern regarding the second anniversary of the sentence issued by the Inter-American Court... 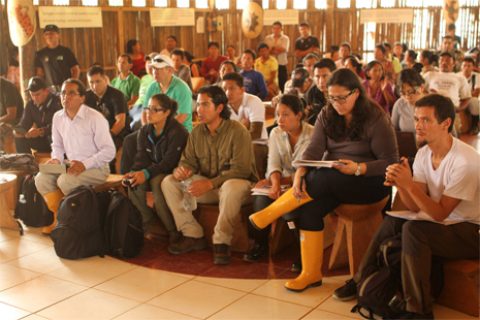 Fourth meeting on compliance with the Judgment of the Kichwa Indigenous People of Sarayaku vs. Ecuadorian State 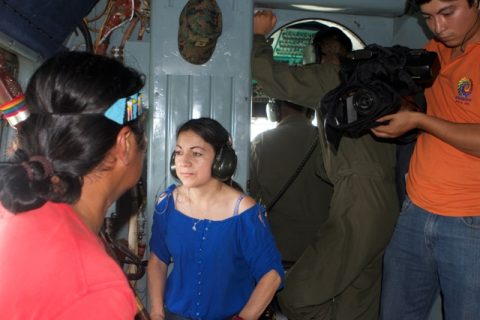 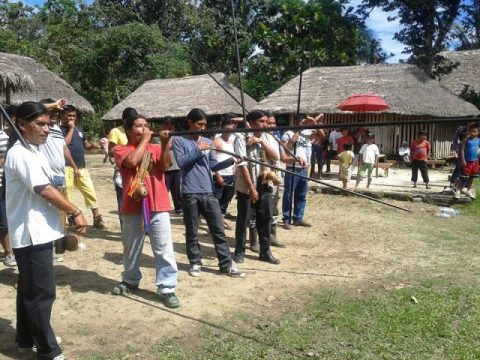 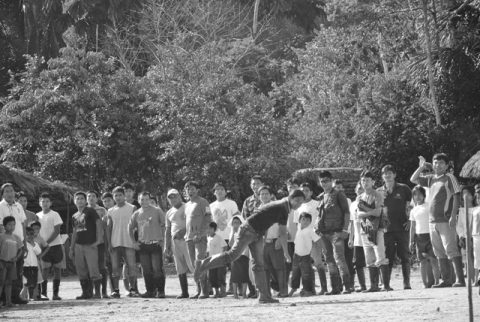 If the so-called citizen revolution wants to sell our territories

If the so-called citizen revolution wants to sell our territories, our homeland, well then, let it be clear: we, the peoples...

Get more information by visiting Inter-American Court of Human Rights