The ritual of hunting and fishing 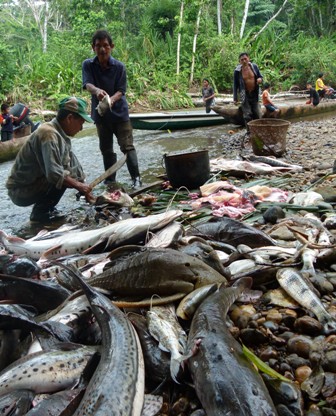 Amazanga is the owner of the jungle. It is the protective being of animals. The Sarayaku worldview says that he is the one who authorizes hunting in his territory as long as it is for family support and never for simple fun.

Amazanga is everywhere in Kausak Sacha – Living Forest. As the entire town is preparing the Uyanza -Traditional Sarayaku Festival, Amazanga has hidden the animals, their children.

For this reason, a particular person cannot go hunting, before he must do "sasi" (adstinence), smoke tobacco and dream the night before. If a hunter dreams that he is carrying yucca, banana, it means that the hunt would be accurate. If you dream that you get thorns, you should not go. With these recommendations from the Yachaks-Sages of Sarayaku, the helpers of each of the parties.

On Sunday morning before going hunting, the men with all the hunting and fishing instruments, their dogs, baskets, bodoqueras, shotguns, spoons, beat their drums and dance around the plaza. To purify the energy, the "apa mama" (grandmothers) of Sarayaku place nettles on their feet and place "ruyak allpa" (white clay) and "yana allpa" (black clay) as camouflage for the face of the brave hunters before to go into the jungle.

Hunting with a bodoquera is a skill of few. Men must do "sasi" to receive the power, strength and energy that will allow a good aim.

In Sarayaku for fishing in the Bobonaza and Rotuno rivers, it is forbidden to use sticks of dynamite according to the rules of coexistence and community and inter-community agreements. The use of barbasco can only occur once a year, under the authorization of the traditional authorities. 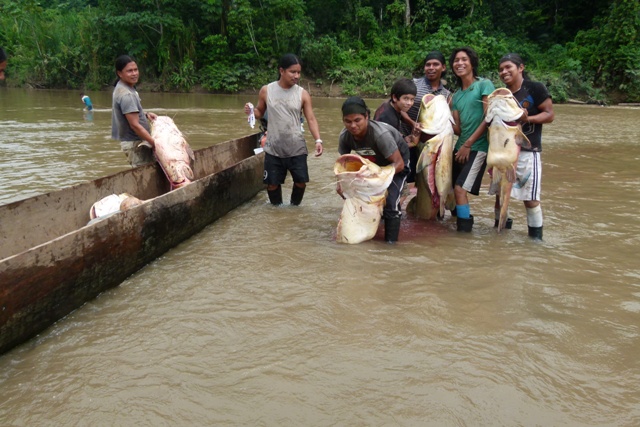 UYANTZA pays tribute and thanks for the kindness and abundance granted by AMAZANGA and to MOTHER EARTH, which allow us to continue existing as a People with dignity and respect for the jungle.

This article has been read 28 times