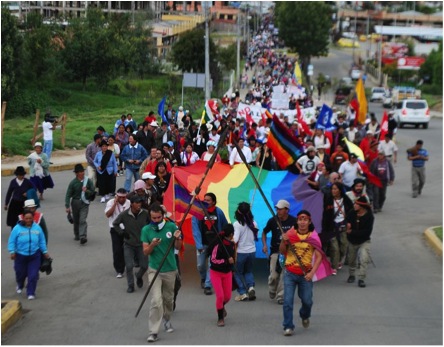 The government of Rafael Correa, in its beginnings, maintained a very alternative discourse, in which it proposed a new economic model based on Good Living. Over the course of his mandate, that discourse changed, until it became configured as a discourse that maintains the extractivist model in its entirety.

In the last four years, legislation has been developed around mining and the Hydrocarbons Law has been reformed, in order to guarantee the Ecuadorian State the greatest amount of economic resources for these activities, backed by a discourse of sovereignty and of national interests.

Thus, with a legal framework appropriate to the interests and economic needs of the country, the extractive frontier is being expanded in the center-south of the Amazon. This extractive expansion has begun with the signing of the contract with the Chinese mining company Ecuacorrientes, whose activity has been illegal and has violated several of the constitutional mandates, mainly the Mining Mandate, in relation to the fact that it affects water sources. The Comptroller General of the State has found at least 17 observations that show disrespect for Ecuadorian legislation and inaction on the part of the environmental and technical authorities.

Additionally, during 2011 several announcements were made about the beginning of the bidding processes to open 21 new oil blocks in the south central Amazon, a territorial space where 7 indigenous nationalities operate, and that their environment and traditional ways of life would be affected.

Since December of the previous year, the Confederation of Indigenous Nationalities of Ecuador (CONAIE) has been calling for a national protest in defense of the principles of the Montecristi Constitution. The five objectives of the march are: 1) the redistribution of water through the urgent approval of a new water law; 2) an agrarian revolution for which the approval of the Land Law and the implementation of the agrarian reform are urgently needed, based on food sovereignty; 3) the change of the mining-extractivist model that is imposed today for a new model, that of Good Living-Sumak Kawsay; 4) the non-acceptance of new taxes that affect small owners and producers; and, 5) the immediate cessation of the criminalization of social protest and the annulment of the trials for sabotage and terrorism against the 194 community leaders.

In this framework, CONAIE and other social organizations that defend water, indigenous territories and are against an extractivist development model, began a march from the Amazonian city of El Pangui (Zamora Chinchipe province) on March 8 and They will tour the country, joining organizations and movements for the defense of life, and they plan to arrive in the city of Quito on March 22, to present to the country and the government an alternative proposal that is summarized in the defense of ancestral territories, in the defense of the last pristine forests in the Ecuadorian Amazon and of the water resources that would be affected by mega-mining and oil activity.