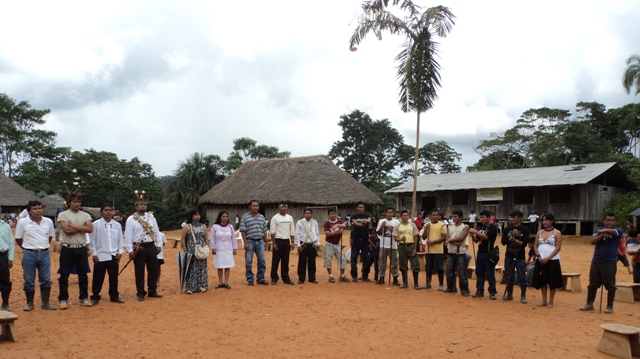 Quito July 7, 2011. Institutions, organizations, students and media were attentive to the Internet transmission of the Hearing of the Sarayaku case in the Inter-American Court of Human Rights in Costa Rica held in Quito on July 6 and 7. Despite the connection difficulties that made it possible to see the hearing with the courts, those present kept their attention on the statements of the Sarayaku witnesses, as well as those of the Ecuadorian State.

The expectation was maintained in the testimonies of the indigenous witnesses of the Sarayaku people, testimonies that reminded many of the situation experienced in this process of affectation of the Argentine oil company CGC that affected the 60% of the Sarayaku territory.
For Franklin Toala, a young Sarayaku leader, the hearing in Costa Rica makes it possible to set a precedent in the Inter-American Court of Human Rights in the struggle to recognize the rights of indigenous peoples to prior, free and informed consultation, a precedent that is also possible to reach international bodies to denounce violations of the rights of indigenous peoples.

For this leader, having reached this international instance is already an achievement, beyond the ruling that the Court may give in a few months, because for the Sarayaku People all their acts are of resistance and to preserve the ancestral identity that they maintain as a people. and that extractivist activities have violated.

The hearing was followed in cities such as Otavalo, the same community of Sarayaku, Quito and Puyo, where a rally was held in the Red Square, which was preceded by a march through the main streets of the city. The presence of the indigenous population, leaders of CONAIE and friendly institutions expressed solidarity with the struggle of the Sarayaku people, who were the benchmark for other peoples of the Ecuadorian Amazon.

This was stated by Mario Santi, coordinator of the Kapari Campaign, which during these years of struggle has worked to inform the national population about the Sarayaku case. For Santi, if the Court rules in favor of the Sarayaku People, a historic milestone will be marked not only for this people, but for others who are fighting in Ecuador against mining and other activities that threaten the territories of the original peoples; as well as respect for the free exercise of their rights and self-determination.

The representatives of the Sarayaku People stated that in the time it takes for the Inter-American Court to issue its verdict, they will continue socializing and reflecting on these years of struggle, since there are many people who are unaware of the violations of the rights of the original peoples protected by the agreements. international as the 169 of the ILO and environmental damage, health and in the cosmovivencia of this native people.

Meanwhile, at the hearing, the right to prior consultation with indigenous peoples regarding projects that affect communities was raised as important in the construction of new ways of relating between governments and indigenous peoples, more so in the Plurinational States. . This was highlighted by James Anaya, United Nations Special Rapporteur on the Rights of Indigenous Peoples who acted as an expert in the case.

This article has been read 141 times