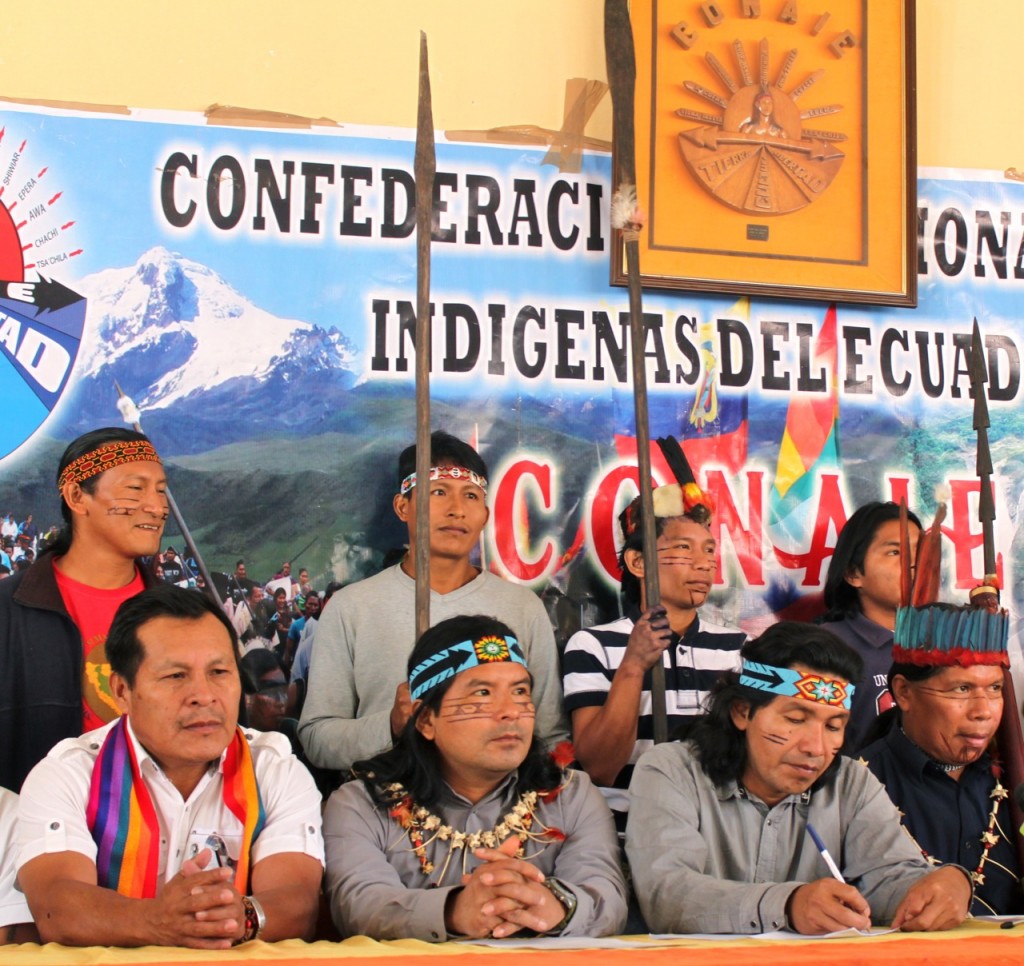 Kito, July 30, 2012:- Through a press conference at the premises of the Confederation of Nationalities and Indigenous Peoples of Ecuador CONAIE, with the presence of a large delegation and authorities from the original people of Sarayaku, accompanied by the people of Pakayaku, presidents from CONAIE (Humberto Cholango), ECUARUNARI (Dolfín Tenesaca), Confeniae (Franco Viteri), National Coordinator of Pachakutik (Rafael Antuni), Assemblyman (Gerónimo Yantalema) and more authorities, to make public their thoughts regarding the sentence given by the Court HDR on the struggle of the original Kichwa people of Sarayaku.

In his order Humberto Cholango, president of CONAIE said: we salute and recognize the brave people of Sarayaku for their dignified struggle, it is a historic victory for the indigenous movement of Ecuador and the peoples of Latin America. This sentence given by the Court is an encouragement for all Ecuadorians and those of us who fight in defense of our territories, human rights and nature. Now President Correa and the Ecuadorian state have to comply because the ruling is mandatory and will serve to defend other cases, other processes such as mining and oil issues.

The president of CONAIE stressed that Free and Informed Prior Consultation is mandatory for governments and states and they have to comply in close coordination with the community authorities, if they do not do so it will be null. That is what they now intend to do with the pre-legislative Consultation for the water law, now with more force we are going to continue fighting against this extractivist model in the country. 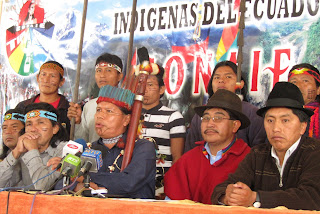 Drums resound from the Ecuadorian jungle

For his part, José Gualinga, tayak apu-president of Sarayaku, accompanied by the people of Pacayaku, recalled that at the end of 2002 they said enough of the abuses and massacre of the life of the jungle peoples, tired of mistreatment by transnational companies in complicity with high state ministries. And from Sarayaku with a firm voice we had to say enough, no more looting here and we expelled the oil companies and the military despite persecution, torture and slander.

With this sentence we say that Sarayaku never gave in, nor knelt and we are going to follow the process until it reaches its end and live experiences until justice is handed down, now we await the response of the State because it never carried out the consultation and violated the rights of indigenous peoples, With this we have taken another step in our struggle. This victory not only benefits Sarauaku, but an entire population, in the legal aspect it inscribes a precedent, in human rights, for the indigenous peoples so that the governments and the state respect the Peoples and Nationalities, Gualinga noted.

The original Kichwa people of Sarayaku will continue this process and will be vigilant to demand that it not be repeated, thus we reject any intervention without consultation and looting by transnational companies and as indigenous peoples we will continue in the struggle for a dignified life.

The legal adviser of the Sarayaku people, Dr. Mario Melo, indicated that there has already been a decade of litigation and the Inter-American Court has agreed with the Sarayaku by issuing a sentence and this is a new precedent in the struggle of the indigenous peoples and is now mandatory. for states.

With this, it establishes processes and a mandate to be consulted by the state to the indigenous peoples, not to be consulted just to listen, but to establish consensus and consent with the consultation mechanisms. It is a story to overcome environmental conflicts, this has been a job for more than 10 years and a contribution to the struggle and history of the peoples in Abya Yala, concluded Melo.

Attached is the full AUDIO of the press conference of the main leaders.

This article has been read 17 times