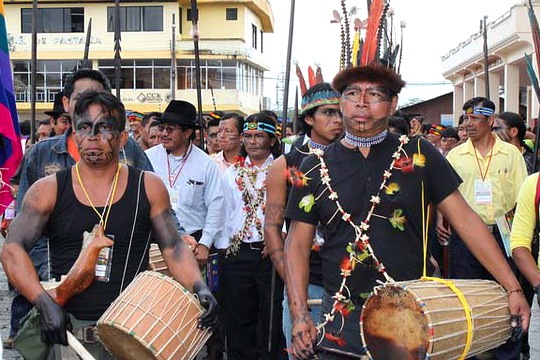 Sarayaku celebrates its Uyanza de Pachamama and the commemoration of the delivery of the titles of the collective territories of the Amazonian peoples and nationalities in the year 1992.

For many years, the Kichwa Native People of Sarayaku have maintained the tradition of thanking Mother Earth and on the same dates commemorating the great walk carried out by the organization of indigenous peoples of Pastaza, OPIP, called "March for the land, for life". Let's get up." A voice was raised from the bowels of the Amazon jungle.

Those were the years when the Amazonian indigenous movement began to claim their rights to the recognition of lands considered uncultivated by the powers of the State.

The Amazonian peoples, described until then as soulless peoples, subject to inhuman discrimination, remnants of the conquest.

In the view of the Government, they seemed like requests impossible to grant. The ancestral owners of these territories asking the supreme masters for their recognition. It seemed that history was going backwards. Why ask, being us the owners? Why be asking for titles to be given to us over what had always been ours?

The ideologues of the march were from the legendary town of Sarayaku, who in multiple meetings analyzed the danger that they saw coming in the future: the continuation of the colonization doctrines now headed by the loggers, the oil and mining industries, the the governments that were ready to execute the so-called development.

As a result of this historic walk on May 11, 1992, the legal recognition of the ancestral territories was achieved by the Ecuadorian Government of that time, Dr. Rodrigo Borja Cevallos. Thus handing over the property titles to the Amazonian peoples and Nationalities.

In the legendary jungle of Sarayaku we continue to celebrate day by day the awakening of Mother Earth and the song of the freedom of the peoples.

During this important celebration, 5 new Kurakas will be positioned - traditional authorities of the Sarayaku people, who will assume their positions with the aim of strengthening the SUMAK KAWSAY in Sarayaku, based on the principles of Sumak Allpa (Territory, Environment and Natural Resources), Sacha Runa Yachay (Wisdom, own technology, ancestral knowledge, indigenous education and culture) and Runaguna Kawsay (Social, Political, economic and basic services). National guests will be present as well as sectional governments, indigenous organizations, communities of the Bobonaza basin, allied NGOs, personalities and the press.

The celebration of the UYANZA DE PACHAMAMA is to prevail and strengthen our way of life, culture, music, art, dance, painting; and to strengthen bonds of unity between sister peoples for the defense of our ancestral territories KAUSAK SACHA –living forest and life as native peoples. After this meeting there will be a statement against the threat of extractive policies that the current Ecuadorian government has been implementing.

This article has been read 198 times