The Original Kichwa People of Sarayaku, before the National and International public opinion. 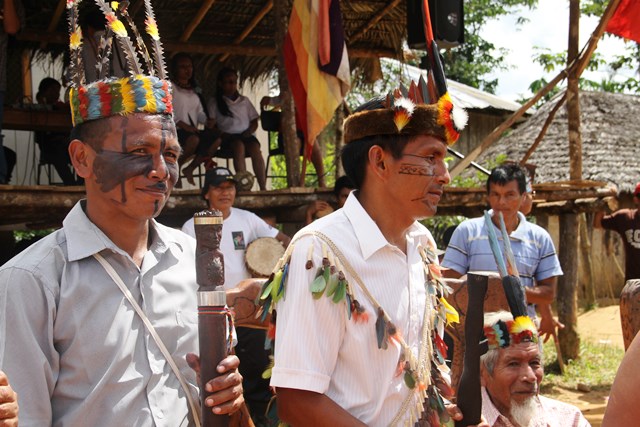 Sarayaku respects and values the current Constitution and has always defended the human rights enshrined in it.
The Sarayaku people have their own organizational structure through which they exercise their self-government within their territorial jurisdiction, enforcing their statutes and regulations approved in the people's congress. Therefore, Sarayaku states that in our territory we do not have any armed or paramilitary group, as the national government catalogs us.
We must clarify that Sarayaku has an internal security group called WIO, established in 2004 through the statute of the Original Kichwa People of Sarayaku recognized by Codenpe. This group has an important role as guarantor of the rules of coexistence for Sumak Kawsay and peace. As an example, we can mention that in different important activities and events organized by the people of Sarayaku, such as the visit of the United Nations Rapporteur on the rights of Indigenous Peoples, the visit of the delegation of the Inter-American Court, and in the interministerial meetings held for in compliance with the sentence of the Sarayaku Case, the Wio Group was the one who received, and coordinated the activities to guarantee the security and the good development of the events. In addition, in the meeting held this year at the Ministry of the Interior with the Deputy Minister of the Ministry of Justice Nadia Ruiz, the Sarayaku Government Council proposed to develop training courses to strengthen knowledge of risks and first aid for the Wio security group.
About him separatism to which the President of the Republic refers in relation to our people, we state that at no time in our history and in the memory of our men and women have we declared independence or separatism from Ecuador. Rather, we have been a contribution to the integrity of the country and we demonstrate it with facts: our indigenous soldiers have defended the homeland with their blood in territorial conflicts with neighboring countries.
The people of Sarayaku have been the author and pioneer of the proposal kawsak sacha “living jungle”, which consists of defending territorial rights and the rights of nature to 'preserve the life of humanity in the world.
The current Constitution declares the state  PLURINATIONALL, guarantees us mutual respect between the diversity of nationalities and peoples of Ecuador.
Sarayaku respects and exercises the plurinationality conceived from our knowledge as we proposed in the Montecristi assembly. Respect for original nationalities should not be just a text written on the letterhead of the constitution by the Government
The three comrades Jiménez, Figueroa and Villavicencio were welcomed by the people of Sarayaku by unanimous and collective decision of their seventh congress, as a humanitarian gesture and thus guarantee their lives.

We will remain vigilant that the government

comply with the precautionary measures of the COMMISSION

For a fair and democratic Ecuador.
Felix Santi
PRESIDENT OF THE KICHWA ORIGINAL PEOPLE OF SARAYAKU

This article has been read 24 times