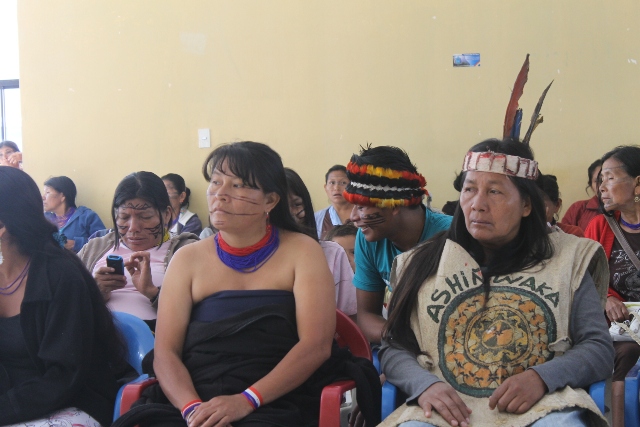 Gathered in a general assembly at the CONAIE headquarters last night, Sunday, October 19, 2013, leaders of the Sapara, Waorani, Shiwiar, and Kichwa nationalities (from the Kuraray basin and the Bobonaza basin) from the south-central Amazon they resolved to remain in Quito until further notice.

The decision was adopted unanimously given the treatment received from both the National Assembly and the Presidency of the Republic, which have not officially responded to their requests so far. The Amazonian women mobilized in Quito for a week have not been taken into account by the national authorities, despite having asked to be received by the highest authorities of the State.

“If the national assembly has already decided to exploit Yasuní, making it impossible for them to receive us, as a press release insinuates that reached the media directly and not us officially, we have decided to defend our territories,” said Nancy Santi, Kichwa leader of Kawsak Sacha. "Expressions like these show the assembly members' ignorance of the reality of Ecuador," she said on behalf of the mobilized women.

According to the representatives of the indigenous nationalities of the Ecuadorian Amazon, the exploitation of the Yasuní park is only part of the threat that the XI Oil Round-Ronda Suroriente, promoted by the Ecuadorian government in the south central Amazon, represents for their territories. , which threaten to alter the lives of the indigenous people of the region and damage the ecosystem. The State's call for the concession of the area has been made without consultation, contravening express international human rights norms and the Constitution of the Republic.

For the reasons noted, they announced that today there will be an official meeting before the United Nations, "because if at the time of defending our rights, the national authorities turn their backs on us, we will go to international organizations," concluded Gloria Ushigua, leader of women of the Sapara nation.

The Amazonian women thanked the solidarity of groups, organizations, families and individuals, men and women of the people, who have joined a legitimate struggle that is increasing, contrary to the official attitude and its attempts to minimize it.

This article has been read 213 times