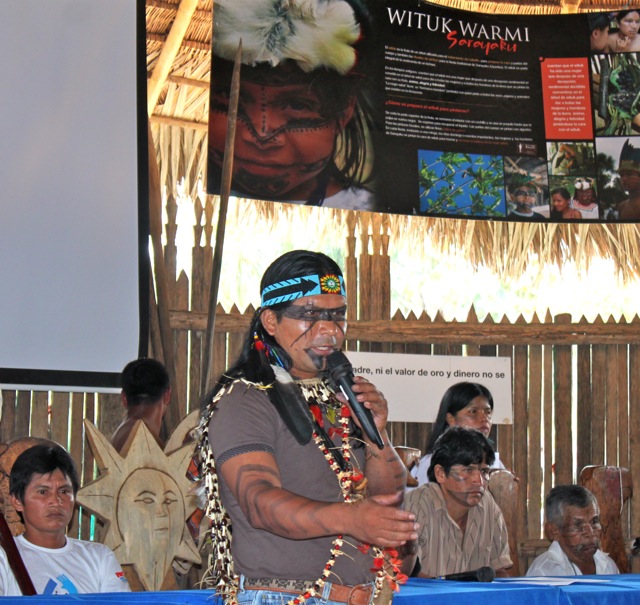 The Original Kichwa People of Sarayaku, CONAIE, CONFENIAE, ECUARUNARI, NAE, FENASH-P, NASE and the peoples and communities of the Bobonaza Basin (PAKAYAKU, TERESA MAMA and BOVERAS) on August 12, 2012, in the act of celebration of the sentence, in the house of the assembly of the people of Sarayaku they state the following:

We, the legitimate authorities, rulers in our territories, reaffirm the full exercise of constitutional collective rights that guarantee the continuity of our identity and the territorial life spaces of the Living Forest.
The industrial actions and projects promoted by the current State Regime systematically violate the life and rights of the Nationalities and Indigenous Peoples, leading us to ecocide and genocide. 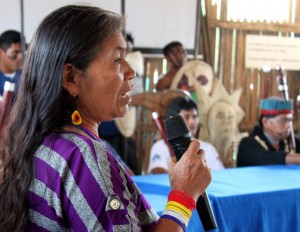 The unilateral decision of the State to allow the exploitation of oil and mining companies violates the provisions of the constitution regarding prior, free and informed consultation. The expansion of block 10 of the AGIP company affects the territories of the Kichwa, Achuar, Sápara and Shuar nationalities in the province of Pastaza. In the Amazon, we strongly reject any activity of the AGIP company in our territories.

We denounce the illegal interference of the Undersecretary of Hydrocarbons in the territory of the Sápara Nation and other nationalities of Pastaza, Napo and Morona Santiago by wanting to impose the illegitimate presidential decree 1247 of July 19, 2012, which intends to suppress the consultation with a simple process of socialization or information, thus ignoring the ruling of the Inter-American Court in the Sarayaku Case.

We declare a state of maximum emergency and alert all the indigenous peoples and nationalities of the provinces of Napo, Pastaza and Morona Santiago where the XI round of oil bidding is to be applied.

We will stand firm and apply our rules, statutes and codes to those who seek to invade our territories.
The Sarayaku People and the nationalities have managed and administered our territories for millennia, strengthening step by step our socio-organizational systems based on our ancestral knowledge and practices of true Life in Harmony and Living Forest (KAWSAK SACHA, IWAKU IKIAM, KAMPUTIN IWIAKU, NAKU IKICHAKA in Kichwa, Shuar, Achuar, Sápara language). Therefore, we firmly reject all the accusations of President Rafael Correa, related to alleged manipulations of NGOs.

We believe that these statements are racist and tend to misinform the Ecuadorian population and citizens in general, delegitimizing our complaint processes before international organizations that have considered that the rights of the Sarayaku people have been violated in Ecuador. 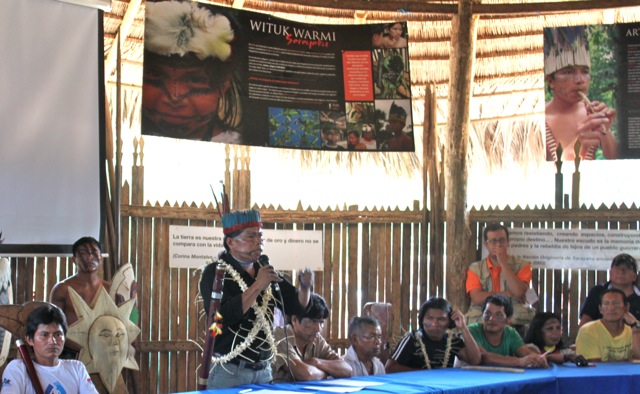 Franco Viteri
President of the CONFENIAE

James Vargas
President of the NAE

This article has been read 200 times