The Original Kichwa People of Sarayaku gathered at the Casa del Medio Día in its VIII Ordinary General Congress on April 28, 29 and 30, 2017, deeply analyzes the socio-organizational political strengthening and the construction of the Life Plan to reach the Sumak kawsay. Name. Case number, of which they are accused.

Summary of the facts and the sentence given.

Tayjasaruta and his governing council have been promoting for more than 35 years of organizational life work aimed at the defense and conservation of Mother Earth to guarantee the continuity of the life of the Sarayaku People.

It is also important to mention that Sarayaku has been working throughout its life process to build its life plan, with the aim of consolidating its autonomous government, strengthening its own model of life, and thus ensuring the continuity of its society. and culture as the Kichwa People, under the philosophical principles of Sumak kawsay (life in harmony) and Kawsak Sacha (living jungle). All these works framed and guaranteed in the constitution and in international agreements on the rights of indigenous peoples to exercise self-determination and autonomy in their territory.

However, in this process of struggle and resistance in defense of the rights to life and mother earth, many leaders and social activists have been criminalized and persecuted by the governments of the day. At the present time there are already hundreds of defendants, many with arrest warrants and others with legal proceedings. Among them we have comrade Franco Viteri, former president of Sarayaku and former president of the regional organization CONFENIAE, the former - Assemblyman Clever Jiménez, Fernando Villavicencio, Carlos Figueroa. For Sarayaku, this constitutes a serious violation of the very constitution that guarantees collective rights and the right to resistance. We cannot speak of a multinational State when leaders are persecuted for defending life and human rights. 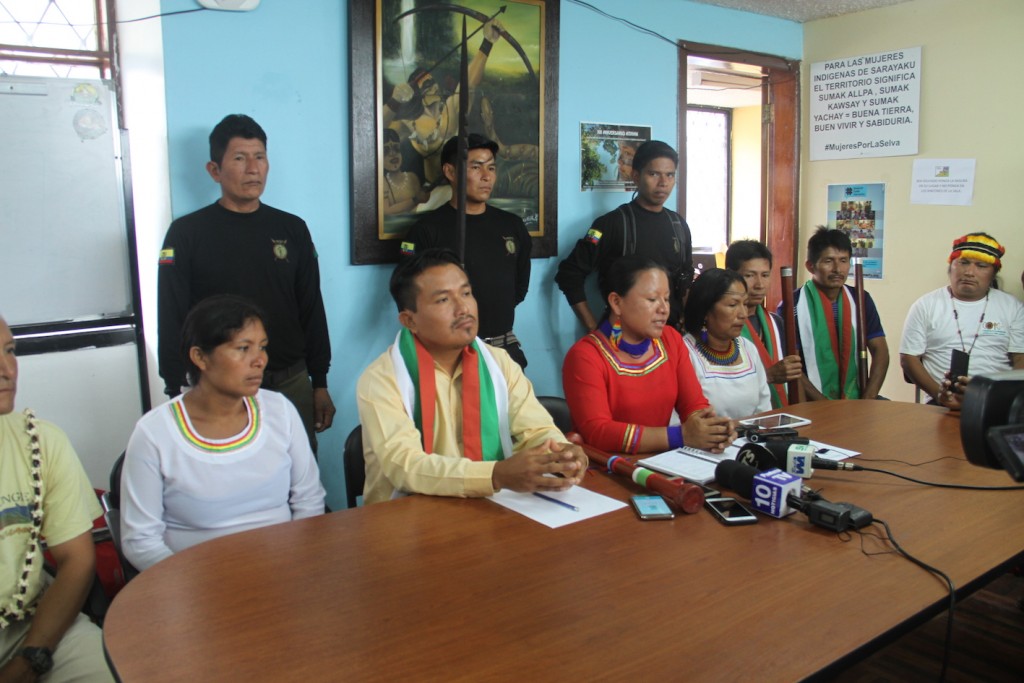 Faced with this situation, the Original Kichwa People of Sarayaku are mobilized to demand and request that amnesty be granted for the brothers unjustly prosecuted in the Ecuadorian courts of justice. Likewise, we must demand amnesty for our comrades Félix Santi, former president of Sarayaku, Rudy Ortiz, former political lieutenant of the Sarayaku parish, Gerardo Gualinga, former kuraka of Sarayaku, Rummy Avilés, a student, and Andrés Tapia, communication director of Confeniae, who are facing legal proceedings. in the provincial court of Pastaza for the case of the alleged kidnapping of the 11 soldiers in Sarayaku.

Likewise, the Kichwa people of Sarayaku demand compliance with the judgment of the Inter-American Court of Human Rights, especially the removal of the pentolite planted by the CGC company from Argentina in Sarayaku territory, and we reiterate our will to resume and continue coordinating the actions necessary for full compliance with the IDH Court ruling, not to mention that Sarayaku will maintain its firm position against the extraction of natural resources of any kind, and will fully defend the proposal of the Living Forest - Kawsak Sacha.

Given and signed at the Ordinary Congress of the Original Kichwa People of Sarayaku, held on April 28, 29 and 30, 2017.

This article has been read 18 times